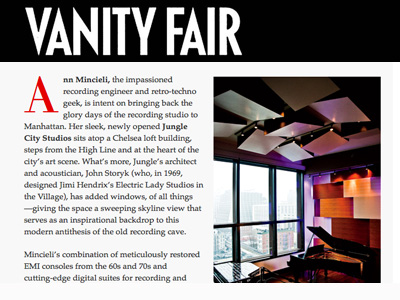 Ann Mincieli, the impassioned recording engineer and retro-techno geek, is intent on bringing back the glory days of the recording studio to Manhattan. Her sleek, newly opened Jungle City Studios sits atop a Chelsea loft building, steps from the High Line and at the heart of the city’s art scene. What’s more, Jungle’s architect and acoustician, John Storyk (who, in 1969, designed Jimi Hendrix’s Electric Lady Studios in the Village), has added windows, of all things—giving the space a sweeping skyline view that serves as an inspirational backdrop to this modern antithesis of the old recording cave.

Mincieli’s combination of meticulously restored EMI consoles from the 60s and 70s and cutting-edge digital suites for recording and editing has top artists (Bono with Swizz Beatz, Beyoncé, Alicia Keys) flocking to her door. Think Aretha Franklin’s first recording of “Respect”—in 1967—at the old Atlantic Records hothouse in Midtown and you start to get the idea. Mincieli’s motto seems to be: When everyone else is downsizing, go grand.